"Sometimes My Heart Pushes My Ribs" by Ellen Kennedy 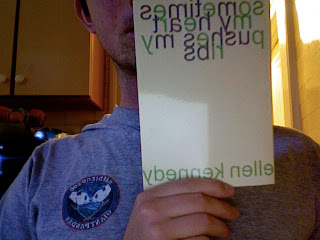 I liked this book. It contains 3 stories and 20 poems. It was the first publication by Muumuu House and is now in its second edition. Steve Roggenbuck loaned me his copy.
The poems and stories seem to describe the events and emotions in a person's life during and after a significant relationship. The protagonist and other characters are sometimes given the names of famous people, including Woody Allen, Norm Macdonald, and Ned Vizzini, who, amusingly, is most famous for a novel called Be More Chill. The characters seem to be sad and lonely and occasionally very happy. There also seem to be a lot of poems that suggest how depressing it can be to feel alienated from your peers or family in addition to the depressing aspects of existing at all.
In the context of unadorned, declarative sentences and very realistic events and directly expressed emotions, the aspects of the book that seemed more imagined than personally experienced stood out to me. One example is how the first story, "Eoody Mobby," opens, with a smoothie vender accidentally running over and killing a sleeping homeless woman with his cart. There are also a number of poems that use various animals to convey ideas and feelings, as in "Manatees," where a catalogue of different animals in different locations doing different things culminates in the image of "a lost manatee orbiting the earth [...] not feeling safe or relaxed but rather feeling a profound sense of loneliness and desperation with a complete loss of hope in ever finding a meaning in existence." Also intriguing to me was how apparently female characters were sometimes given the names of male celebrities, as in the first story, where the name Woody Allen is given to a character who appears to be a stand-in for the poet.
Many poets are praised for the way they use form or play with language or express their politics or try to reshape experience. I can appreciate those things. But what I like most of all in poetry, in a poet, is a way of seeing and feeling that makes me shiver and well up. I read the title poem, "Sometimes My Heart Pushes My Ribs," a simple informative declaration that the poet is going to send a package to someone with their name on it and send it, and then an "okay?", and I felt a surge of emotion. I like not knowing quite why.
"Rest your face on the other side of my neck
Close your eyes
Wait for sleep"
Posted by Stephen Tully Dierks at 12:04 PM