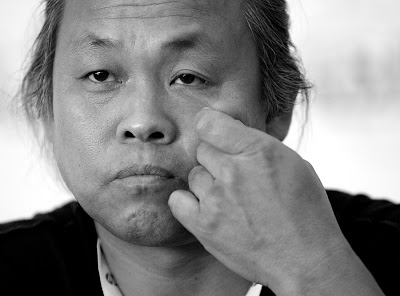 I have been watching movies by the South Korean director Kim Ki-duk. His movies are interesting, entertaining, and moving to me. His movies tend to have little dialogue, thus emphasizing the actions of the characters. Oftentimes there is a female protagonist who is a prostitute or otherwise involved in dramatic situations involving sexuality. His movies seem designed to present people, emotions, ideas, and situations in a heightened, compelling fashion, inspiring questions without answering them.
I am interested in absence-of-dialogue as well as only-dialogue/lots-of-dialogue in literature and in other types of art. I like both The Catcher in the Rye and Molloy because of the voices I hear as I read. I don't know if there is a no-dialogue/little-dialogue novel I could read and/or write that would be appealing in the way Ki-duk's movies are to me. 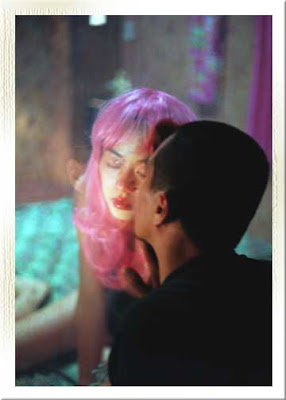 Bad Guy (2001)
The first Ki-duk movie I watched was Bad Guy. A pimp sees a woman sitting on a bench with her boyfriend, goes up to her, and forces her to kiss him. Later he kidnaps her and forces her to be a prostitute in his brothel. The pimp is violent and doesn't talk much. He watches the woman through a one-way window that looks into her bedroom. She has trouble adjusting to being a prostitute and cries often. The other prostitutes are jealous of her because men prefer her due to her good looks. The pimp is nearly-fatally-assaulted several times during the movie and imprisoned after a fight with a john who is abusing the woman.

I liked Seo Won, the lead actress in Bad Guy. She is pretty and I liked looking at her face, and I felt emotional during some scenes of her crying. 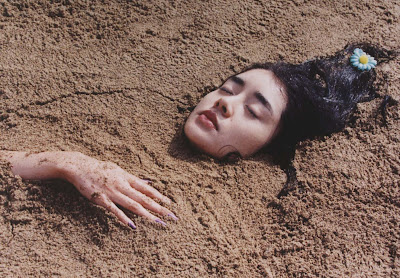 Birdcage Inn (1998)
The second Ki-duk movie I watched was Birdcage Inn. I liked this one more than Bad Guy. It seems a little more playful and less melodramatic than Bad Guy, although there is similarly prostitution, emotional abuse, and violence in the movie.

In Birdcage Inn a 22-year-old girl, played by Lee Ji-eun, comes to a motel to work as a prostitute. A family lives there and runs the motel. The father is attracted to the girl and rapes her. The mother sees her as simply a source of income for the family. The brother is attracted to her and convinces her to let him take naked photographs of her and to have sex with him. The daughter is the same age as the girl and openly hates her, partly because the daughter is sexually repressed and facing pressure from her boyfriend to have sex.

I liked the lead actress in Birdcage Inn a lot too. She is pretty and I liked watching her. She seemed less anguished than the lead in Bad Guy. She seems mostly resilient or calm when dealing with the abuse/conflicts she faces, although she does cry sometimes. 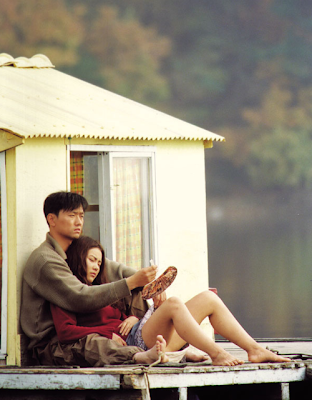 The Isle (2000)
This one is about a woman, played by Seo Jeong, who runs a fishing resort. She is silent throughout the movie except for one significant, piercing scream. She is the strongest, most bad-ass of the female characters I've seen in his movies so far. She is passionate, even murderous.
The entire movie takes place on the water, as the woman rides her motorboat to and from the various rented houseboats providing services to guests, including prostitutes. The pace is steady and calm except for occasional violent scenes. I read in reviews that some people left the theater and vomited due to some graphic scenes in the movie, but I didn't have that reaction. The cinematography is beautiful, more striking than in the two previous Ki-duk films I watched.
The fishing resort woman becomes attracted to one of her guests, a man (played by Kim Yu-seok) who is wanted for a crime. She rebuffs his sexual advances initially, but she becomes jealous when one of the prostitutes shows interest in him.
The woman prevents him from committing suicide two times. The second time is probably my favorite scene in the movie. Authorities are coming to get the man, and he attempts to kill himself by swallowing a string of fishhooks. The woman finds the man, bleeding profusely, and hides him from authorities. Then she extracts the fishhooks from his mouth and, as he lies there gasping, she unzips his pants and rides his dick, finally consummating their attraction to each other.
I love the scene and the movie as a whole because I'm made to see the physicality of experience as opposed to the intellectualization of experience. Ki-duk emphasizes the human bodies of these characters doing things, existing, experiencing pain and pleasure. Words and ideas are secondary to experience. 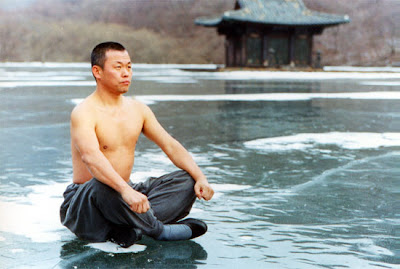 Spring, Summer, Fall, Winter... and Spring (2003)
From my reading on Ki-duk, it sounded like this was Ki-duk's "masterpiece" and also one of his most explicitly Buddhist-themed films. As a person interested in Buddhism, I was psyched to see it. But when I tried to watch it, I got impatient, started skipping around, and ended up not finishing it. Maybe I was not in the right mood.
The movie presents the metaphorical seasons of this guy's life in concert with the changing weather seasons. The boy is raised by his father(?)/some older guy in the middle of a lake in a floating house. The boy learns lessons, meets a girl, and other stuff happens of which I am unaware as I skipped around and didn't finish it.
The thought occurred to me that this movie was the first of his I'd seen that did not have a central female character and that it had the least amount of sex. I'm going to not watch Ki-duk movies for a while and then maybe watch more sometime later. 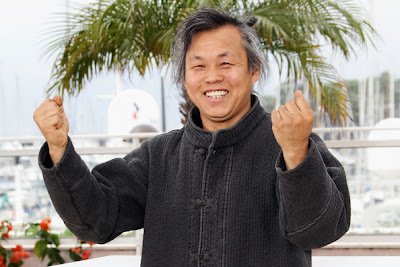