The Poetry of Steve Roggenbuck 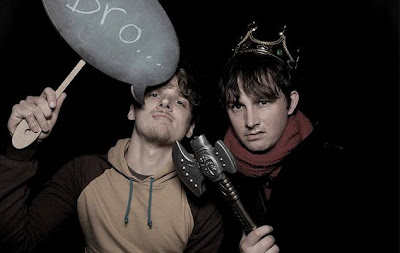 Hey people, if you didn't see it already, HTMLGIANT posted a piece by me called "The Poetry of Steve Roggenbuck." Thank you to Blake Butler for publishing it.
In the piece, I discuss Steve's two poetry collections, i am like october when i am dead and DOWNLOAD HELVETICA FOR FREE.COM, both self-published in book form and for free online, as well as Steve's Internet Poetry project, his videos, and his Facebook and Twitter activities, amongst other things. Also included is a 4-part video interview of me asking the poet some questions.
Response in the comments section has been mixed. Susie Anderson commented "yay boiz," and Elaine Sun praised my Brita filter analogy (from one of the videos), while someone posting under the name ":(" commented, "this is where beauty goes to die," and "letters journal" commented, "I don't think these are good poems," and added that they seem "sub-A Softer World to me." The negative comments, particularly those that expressed vitriol and little else, were referenced in M. Kitchell's post "On Criticism," published the following day. Kitchell, who was a vocal defender against shit-talkers in the comments section of my post, wrote something in the comments section of his post that I'd like to quote below:
"I think it's pretty easy to hate something without writing a scathing review of it. My concern is that I'm going to die some day, and whenever I think about how much time I've spent hating things I get remarkably pissed at the fact that that time would have been better spent either thinking about things that bring me pleasure or finding new things that are awesome."
Posted by Stephen Tully Dierks at 2:16 PM 0 comments 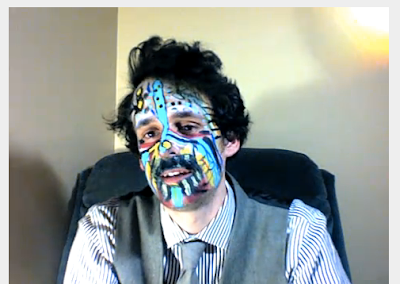 Mike Bushnell has been in the internet literary scene for a while, much longer than I, and Traumahawk is his first print book. The story of his history in the scene can be found here. He has had several pseudonyms, but Mike Bushnell is his name.
Traumahawk is a very emotional poetry collection that seems to be inspired by a painful breakup or perhaps by a strained on-again/off-again relationship. The poems are minimal and direct and earnest. The collection opens with a trauma of sorts, an image of a man barely escaping a wrecked car. It also introduces a narrator whose casual vernacular ("'aw heck' I say / 'it was nothing kid / it was nothing'") reminds me of how Bushnell sometimes speaks. With this metaphorical rendering of trauma in place, the collection proceeds with poems addressing the woman he loves and poems that describe his life without her.
Some of my favorite poems in the book, like "It Builds Our Barn," describe overwhelming happiness. "Telling You Makes Me Cry" describes the feeling of finally saying something to someone that you've been thinking for a long time.
Some of my other favorite poems portray loneliness. "Are You Imaginary" is a beautiful poem about loving someone from far away, from a safe distance. Bushnell writes:
my eyes are the eyes
that beg you
to affect my life
like a pinch
or a face slap
In "Reallyreally," the narrator's mind is made up, he wants to ask this woman to marry him:
goodgoddamm
I don't like food I'm not tired
the house ain't clean but I ain't cleaning
I wish I could ask you to marry me
The book is largely concerned with the narrator's relationship to this woman, but there are poems that reflect on the poetry-making itself and on people outside this intense relation of two. In "Once I Was A Terribleterrible," Bushnell writes, "I am the person that these things must happen to / so that people who can connect may sustain / and have something / to talk about." This struck me as an interesting take on emotionally vulnerable poetry. I like the phrase "people who can connect."
My favorite poem in the book is undoubtedly "Watching Baseball on Mute." Poncho Peligroso, 2011 poet laureate, was visiting when I was first reading the book, and this was the first poem that I read aloud to him (the first of several). It describes a lonely man watching a baseball game on mute and seeing a woman talking on her phone in the stands and feeling like he recognizes her. He thinks about getting up to hug the TV. This is how it ends:
because I watched someone connect
with someone else in the background
and that is just sad
who am I kidding
I kneel next to it
and embrace machine
Here is a video of lovely Ana C. reading one of the poems from the book, "Call Me a Convert Because I Really Do Believe In Love":
Posted by Stephen Tully Dierks at 10:17 AM 3 comments 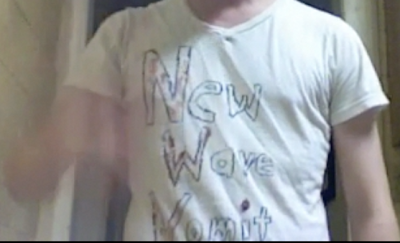 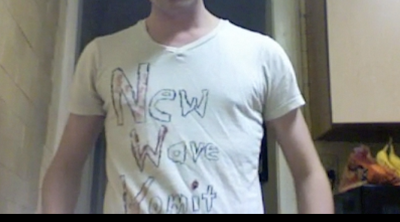 Swagnum P.I.
Hi everybody
I haven't blogged here in a while. Life feels so empty now that the 2011 poet laureate isn't there when I come home at night...
Above you can see my homemade New Wave Vomit shirt. If you write New Wave Vomit on a white t-shirt, take a photo of it, and send it to Ana C., she will feature it on her new hype site, New Wave Vomit Swag. Kewl...
You can see Steve Roggenbuck, Brett Gallagher, and I reading poems and being goofy-ass bros on Ustream this past Sunday here. Features red wine, nuzzling, tongue, tweets, poems, shoutouts, and other things. Thank you to everyone who tuned in. We're hoping some of you will do your own Ustream broadcasts in the future.
***
I want to read more. Feel like I should work on my real life more, maybe... Feel like I actually live on the internet and not in the world.
***
Adam Robinson published my story "Serious European Art Film" at Everyday Genius. I am happy about that. I wrote the piece to read at the first edition of Cassandra Troyan's reading series, EAR EATER, on September 17th of last year, my 25th birthday. Tao Lin was there, and he was nice and took a video of me reading:
It's taken a while for that piece to be published. The nice thing is, I looked at it again, once it was accepted, recently, and made some changes, and Adam suggested some things, and I like the final version. Hurray
Negative Suck published a poem by me called "This Pretentious Twaddle Sure Sets A New Standard for Sentence-Driven Fiction." I'm not sure what to say about it.
Housefire published a piece by me. My title for it is "ALL CAPS NO PUNCTUATION," but it was written after being given a title or prompt by the editor, Riley Michael Parker, so it's published under that title, "We Are the First, We Are the Last."
***
My hair is getting long...
I've got two ebook projects to work on. One is a solo ebook for DJ Berndt's ebook series, Pangur Ban Party. That would be my first-ever collection or long-form thing. My goal is for it to be like an album you like to play a lot, and you have certain favorite songs but you can also sometimes play it all the way through if you're in the mood.
The second ebook project is called I LOVE MUSIC, and that will be a collaborative ebook with Steve Roggenbuck, which I think will use material from our mountains of emails to each other. Should be sillie + sweet...
***
I mailed out some more copies of Pop Serial #2 today. If you are owed a copy and haven't gotten one yet, here's why: I received copies at the end of December, just as I started a new job. I started the new job with no savings. I had no money left over from Kickstarter or anything else for mailing. So I've been mailing them in batches, a little at a time, as much as I can given my finances. My finances are improving, slowly, and I will get the magazines to you as fast as I can. I apologize for not communicating better about this, and I thank everyone for their patience and support. My email is stephen.dierks@gmail.com
M. Kitchell is designing an online home for the issue, which I'm happy about, both because I like his site design and because that way a lot more people can check out the magazine.
I plan to continue Pop Serial, both the blog and the magazine. I'm not sure yet what the next edition of the magazine will be like.
***

Do yall have any comments, questions, or suggestions for me? How is yalls lives?
Posted by Stephen Tully Dierks at 4:56 PM 6 comments