With us in the studio today, the London Bach Choir. Now, the latest on Omar De Col:

Omar De Col has been spotted at Dunster Beach. Reports are coming in he is wearing extremely tight, hot pink swim trunks. Sources claim he is “double-fisting” and appears to be “completely arseholed.” Eyewitnesses have noted increased staggering in his locomotion and increased levels of speech slurring and eye gleamage. Omar De Col’s increased eye-gleam quotient has caused him to seem even more charming than usual, the most charmingest amount of charm ever contained in a living male or female, an international record says the Daily Mail. Three rotund semi-nude ex-priests sunbathing on an adjacent towel have collectively unhinged their mandibles.It appears Omar De Col has dropped something. The sun is very bright, potentially blinding. We’re certain he has dropped something, but what exactly it is, we can’t yet confirm. More news forthcoming.We can now report it is an iPhone 3GS. Omar De Col is flailing around looking forward it in a manner reminiscent of Snuffleupagus with his long trunk.
Sources now tell us Omar De Col has regained possession of his iPhone 3GS, which was dropped. He appears to be grinning uncontrollably. He is now sauntering down the beach in defiance of his diminished locomotive skills.
Omar De Col appears to have halted and appears to be conferring with an elderly gentleman. The elderly gentleman is wearing grey slacks and rather ragged-looking shoes. He is also shirtless and appears to be quite inebriated as well.
We have dispatched our junior reporter Lacy Maxwell to the scene, and she is now reporting live via satellite.
Posted by Stephen Tully Dierks at 6:48 AM 3 comments

"wtf is this? words? can't be bothered with this" - Crispin Best 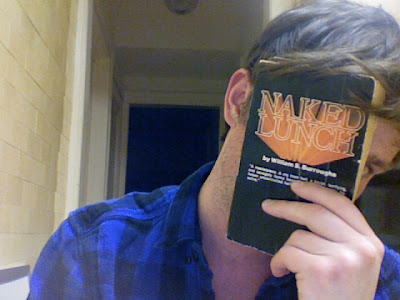 <3 u Crispin mate.
Does seem like why would you blog. Does anyone blog?
Wut iz
a blog.
Brb pizza is ready.
***
If you didn't see these already, I posted visual poems at All Write Then: "Notes" (involves Ezra Pound); "Trance Remix" (involves Steve Roggenbuck, screenshot collage poem); "Perish the thought" (involves a nude balding old man).
At Let People Poems, I posted a poem called "I fell asleep during Winter's Bone."
***
I read some books recently, they are:
Best Behavior by Noah Cicero
I enjoyed this book, some parts more than others. Some parts made me laugh. All parts I could imagine in Cicero's voice having heard it on YouTube.
Chapters 5 and 6 seemed like standouts to me.
In Chapter 5, Cicero depicts the funniness and bleakness of a place where the protagonist worked as a dishwasher for a year. I like the part about mopping floors:
"It never bothered me to mop floors though. I kind of liked it. I would look down at the floor before I started and say to myself, 'Wow, what a dirty floor.' Then I would mop it with industrial strength de-greaser and bleach. Then spray it off with a hose so it would look beautiful."
In Chapter 6, the protagonist and his girlfriend go to a Youngstown bar to hang out. I like the descriptions of the characters and the dialogue. I like how at the end of the chapter, at closing time, everyone is crying.
As I said, there are many funny moments in the book. There is a particularly entertaining sequence about the protagonist and his writer friends attending a fancy New York literary event that I first read at Muumuu House's website a while ago.
There is also a description of Noah's experience taking part in a NYLON photoshoot for Muumuu House with Tao Lin, Zachary German, and Brandon Scott Gorrell. It was interesting to me to read an account of the experience and how these people may have acted during that period. I was particularly interested in Zachary's apparent fictional stand-in, John Walters.
Some excerpts featuring John Walters:
1.) "John Walters finished a fried chicken leg and yelled, 'MY FUCKING LEFT NUT IS A RECTANGLE!'
A middle-aged Puerto Rican walked by and John Walters yelled at him, 'I'M FUCKING PROTESTANT, DO YOU KNOW WHAT THAT MEANS! I'VE A FINGER AND AN ASSHOLE, DO YOU KNOW WHAT THEY HAVE IN COMMON. I WALK DOGS AND MAKE MORE THAN THE PRESIDENT!'"
2.) "John Walters said to Hu Chin and I, 'I'm taking meaninglessness to new levels. You don't know meaninglessness. I'm going to get enlightened in the art of meaningless behavior. I will be the Buddha of meaninglessness.' Then he screamed, 'I WILL FUCK THE GODS OF TIMES SQUARE WHILE I WALK THEIR DOGS!'"
I was also interested in the portrayal of the protagonist's relationship with Petra, a girl he knows online and then sleeps with while in New York, although it depressed me.
Sometimes it seemed the author was generalizing or stereotyping when describing characters, explaining their motives/defining "who they are" sociopolitically-speaking.
I enjoyed many parts of this book and would like to read more things by Cicero. I like his sense of humor and attempt at honesty/compassion/no bullshit.
I Don't Respect Female Expression by Frank Hinton
My review is forthcoming.
Naked Lunch by William S. Burroughs
I like this book a lot.
I really dig Burroughs's prose style. I like his short paragraphs and how exciting many of his sentences feel. The excess excised.
I like the idea that he assembled, with Kerouac and Ginsberg's help, an order and form for the book out of a large body of text. I like how the sections, or routines as he calls them, do not proceed linearly and have great variety one from the other. I like how the book ends with a preface.
***
I bought Camera by Jean-Philippe Toussaint today. I am looking forward to reading it. I've been wanting to read him for a while.
Here is an interview with Toussaint on Bookworm. He has described what he writes as the infinitesimal novel.
***
I'm going to start a Formspring sometime I think.
Want to write a story called "I Am Not My Thoughts."
I am moving into an apartment with Brett Gallagher at the end of the month.
I am meeting Timothy Willis Sanders at the end of the month.
Are.
U.
Hot.
Posted by Stephen Tully Dierks at 6:08 PM 15 comments