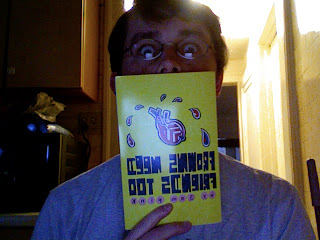 This book impressed me a lot. I liked it very much. It is 150 or so pages of Sam Pink's poems, written between 2007 and 2009. This book was very satisfying to me. By the end of it, I had spent a lot of time with this person, this narrator of all these poems, and I liked him, liked the blunt and the beautiful things he said, felt as if he had made me feel better about being alive even as he had reminded me how shitty things can be. And I felt like he had tried to be a poet but only his kind of poet, as he defined it, as he could do it, and I don't see any other way to be even remotely satisfied with my work than to be my own kind of writer.

The poems seem taken mostly from real life experiences and thoughts and emotions, with some use of fantastical or obviously fictional elements. I repeatedly found myself surprised by a line mid-poem, felt like the poem was "blowing my mind." Many of the poems seemed metaphysical, which I really liked. There seemed to be an awareness of nothingness as well as of everything being related.

When I first read some of Sam Pink's work online, I immediately appreciated it, but I think I kept telling myself things like, "He's really talented and funny, but why is he so negative all the time? Isn't it 'easier'/'a cop out' to be negative all the time?" Having read this book, I feel like I had an ignorant idea of what Sam's poems were doing. I also think the moments of direct tenderness in his work (which I may have initially missed or hadn't yet encountered) are all the more moving because of the negative-sounding things that surround them. The thought that this book kept giving me was that condemning one's body and oneself and other people can be some sort of paradoxical renewal of mind and body, given the knowledge that time and the human body and everything is limited and wasting away. By making bodies more tangible and rotten, by violence in word or thought, by giving oneself a concussion of the heart, one can feel alive again.

I loved many lines in this book, but here are some:

"But yes, jump off a building onto a smaller building and do that until you are on the ground then dig a hole and act like you don't want to ever see anyone again."

"Everyone is exactly the same. Everyone is describing the same thing. I am part of the thing being described."

"...I was very cold lying on the banks of a small pond in the middle of the woods alone, talking to a bald dandelion."

"I need to find someone who will buy walkie talkies with me, and then go out into public and walk side by side saying, 'fuck you, over' back and forth."

"There is a point at which the frequency and nature of your communications come close to actually forming a relationship and it is that point I have searched out with scientific care."
Posted by Stephen Tully Dierks at 7:45 AM