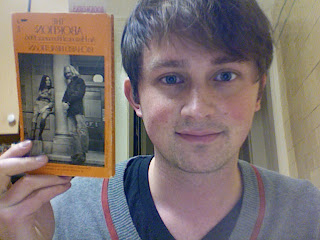 Hi everybody. It is almost December.
I read The Abortion: An Historical Romance 1966 by Richard Brautigan. I enjoyed it. It's about this guy who works and lives in a library, and he meets this woman, Vida, they have sex, she gets pregnant, and then they go to Tijuana so she can get an abortion. Like the other Brautigan books I've read, it has a fun tone and is written in a casual, sometimes conversational style.
I enjoyed the premise of him working and sleeping in a library, and I liked the fantasy of a woman coming into the library, a flirtation, and then them having sex in the library. Seems like the "An Historical Romance 1966" subtitle plus the events of the book could be interpreted as a winking reference to the "free love" movement that was happening at that time (the book was published in 1971). Also seems funny to set an historical romance 5 years in the past.
As is true of everything I've read by Brautigan so far, the premise and the feel of his work only partially explain the appeal of the books for me. There's also this unsettling element at work, that's barely there on the page.
Here is a part I liked:
"We were both tired, but not as nervous as we could have been facing the prospects of the day, because we had gone into a gentle form of shock that makes it easier to do one little thing after another, fragile step by fragile step, until you've done the big difficult thing waiting at the end, no matter what it is.
I think we have the power to transform our lives into brand-new instantaneous rituals that we calmly act out when something hard comes up that we must do.
We become like theaters."
I'm reading with Sam Pink and two others at the Orange Alert Reading Series at The Whistler on December 19th.
I've also arranged a big Pop Serial reading at Innertown Pub on December 21st. Jordan Castro will be in town, because he also has a group reading at Quimby's, and it looks like many other contributors from the Midwest area will also be in Chicago. I'll have more details later.
Posted by Stephen Tully Dierks at 4:01 PM